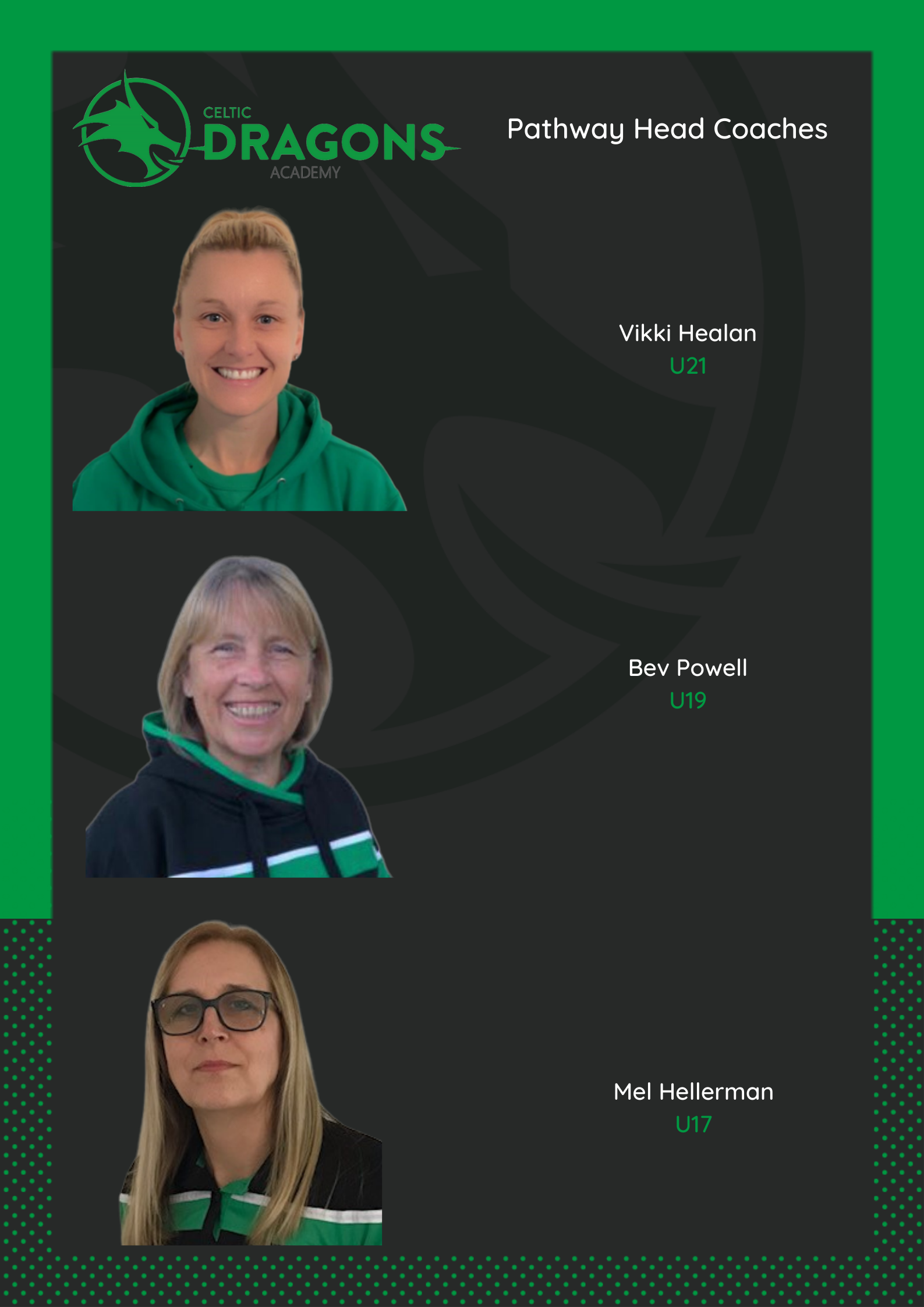 We are pleased to announce that Vikki Healan (U21), Bev Powell (U19) and Mel Hellerman (U17) will lead the Celtic Dragons pathway as Head Coaches. They will be joined by Assistant Coaches Michelle Waddon (U21), Abby Miles (U19), Gail Calford (U17) and Anna Marsh (U17) and Team Managers Keira Davies (U21), Jessica Sutton (U19) and Rhiannon Thomas (U17).

The coaches and team managers that will be running the team pathways boast a wealth of experience and passion. The U21’s pathway management team consists of Vikki Healan, Michelle Waddon and Kiera Davies. Vikki is the owner and head coach of a large successful adult and junior club in Cardiff called Cherubs Angels. She currently oversees the Malta international programme and head of Netball at Cardiff & Vale College and is about to complete her UKCC Level 3 coaching qualification. Michelle is the Junior Head Coach and co-owner of Cherubs Angels Netball Club. She has recently completed her UKCC Level 2 Coaching Qualification and has experience in working in Sports Development for over 3 years. Pre Covid-19, Keira was the Wales U17’s Performance Analyst and currently coaches at Cardiff Metropolitan University and Llantrisant Netball Club. She is also a UKCC Level 2 qualified Coach and a C award umpire.

Taking the reins of the U19 pathway will be Bev Powell, Abby Miles and Jess Sutton. Bev has been involved in the Celtic Dragons U19 squad since the pathway’s relaunch and has previously coached in several areas of the Wales Netball Pathway. She has attended 6 Europe Netball competitions with Wales U17s and U21s and is currently the Head Coach at Cardiff University. Abby has been involved with performance pathways for Team Bath U17, Severn Stars U21 and Wasps U21. She teaches PE full time and coaches junior and senior netball across 2 clubs. Jess has taken every opportunity to be involved in all aspects of netball, from playing, umpiring, coaching to now working full time in netball.

For the U17’s Mel Hellerman will take the role as Head Coach, supported by Gail Calford and Anna Marsh as Assistant Coaches and Rhiannon Thomas as Team Manager. Mel is an ex-Wales international player who played in Europe Netball competitions and the World Championship in New Zealand. She has not only played in the Wales Netball Pathway (U18 and U21), she has coached in the Wales Netball Pathway for 10 years and has been the Assistant Coach for the Celtic Dragons U19 squad. Gail is a passionate netball fan and qualified UKCC level 2 coach with over 15 years’ experience coaching clubs, universities and Wales netball development and performance centres. Anna has previously coached Welsh Talent Centres and currently plays for Newport Netball Club. Rhiannon is a PE teacher who is the current junior Head Coach for Cardiff U18s and the Vale County Netball squad.

Celtic Dragons Vitality Netball Superleague Head Coach Danielle Titmuss-Morris said “We are so pleased to be able to announce our Pathway staff. We have some fantastic coaches and support staff who can help drive our vision for the pathway to the next level. These guys have a plethora of experiences, and our athletes are fortunate to have them working with them this season.”

We are delighted to have appointed Vikki, Bev, Mel, Michelle, Abby, Gail, Anna, Keira, Jessica and Rhiannon and we wish them the best of luck in their roles!