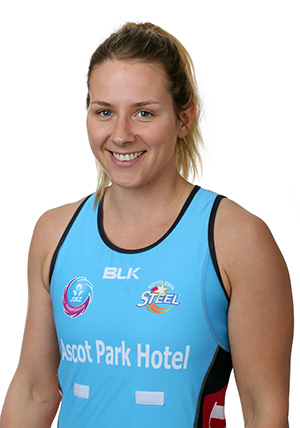 Centre court player Peeters looks forward to a new challenge in her netball career with the Celtic Dragons:

“I am delighted to be part of the Celtic Dragons playing roster for 2017,” says Peeters, who has represented New Zealand in the Under 21 team from 2011 to 2013, who won the World Youth Netball Cup in Glasgow, Scotland in 2013.

“I have been really impressed with the set up at Dragons and in what they want to achieve on and off the court. Their professional approach is sure to benefit netball in Wales across the board.

“I am also really looking forward to mixing with the best players in the UK and helping the Dragons be a competitive force in the competition.”

Stacey is originally from a dairy farm on the outskirts of a rural town called Gore in New Zealand. Head Girl at St Peters College, Stacey made the New Zealand Secondary Schools netball team.  Stacey then progressed with her studies by moving to Dunedin where she successfully balanced her studies with representative netball.

Stacey managed full time study whilst playing semi-professional netball, and graduated in 2014 with a Bachelor of Applied Science.  Stacey now works for the Otago Academy of Sport, and is the coordinator for the New Zealand Elite Motorsport Academy.

“We are thrilled to have signed Stacey to the squad and look forward to welcoming her to Wales.

“Stacey has exceptional netball skills and with the wealth of experience she has gained playing in the ANZ competition will contribute significantly to the Celtic Dragons 2017 campaign.”

Celtic Dragons recently announced their successful four year contract with the prestigious elite netball Superleague which has been hosted by England Netball since 2005.  The franchise team will be one of ten teams to go head to head in 18 matches from February to June 2017.  As the only Welsh team in the Superleague, the Dragons combine the finest players from all over Wales with a mixture of international talent blended into the group.