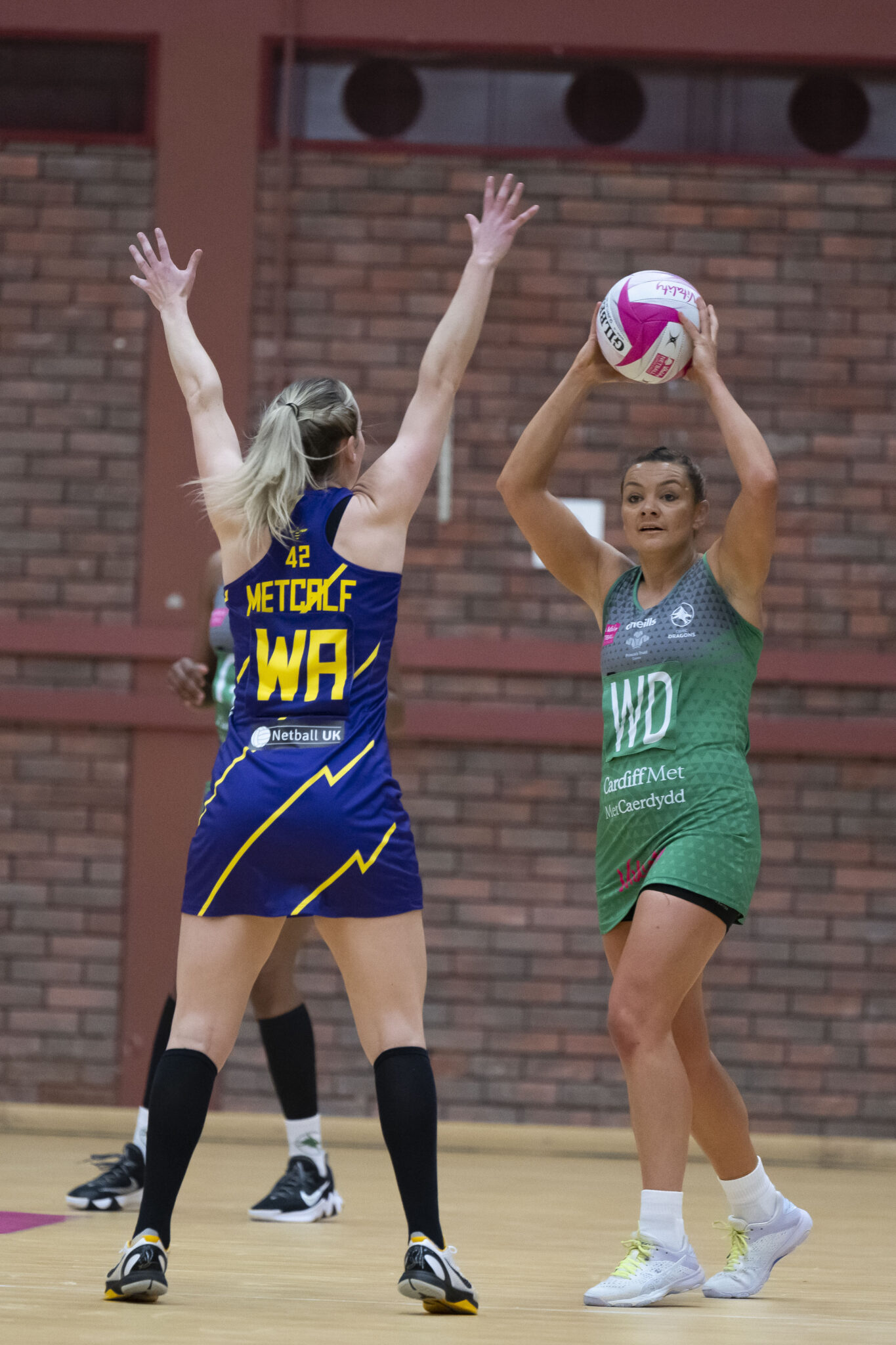 The game begins with both teams getting the ball to their shooters with ease. The Vitality Netball Superleague GK of the round Shaquanda Greene-Noel flies across the court to get the tip followed by the pick-up. The ball gets down to Dragons attack, but Shona O’Dwyer struggles to find options and the ball is intercepted by Metcalf. Both teams manage to settle after a period errors and the game goes goal-for-goal. A string of errors from Dragons finished by Thunder gives them a 5-goal lead. A fake to the side from Rademan draws Kerry Almond out and leaves Georgia Rowe on her own by the post, giving Dragons the settler they need.

Thunder make some changes going into the second quarter. Millie sanders enteres the court at goal defence, moving Shadine van der Merwe to wing defence, Laura Malcolm to centre and sending Caroline O’Hanlon to the bench. On the first centre pass, Dragons show good patience as they work the ball into the circle and score. Tips from Laura Rudland and Shaquanda Greene-Noel give Dragons possession, but they can’t convert. The Trinidad and Tobago goal keeper gets another tip and follows it up with the pickup, but again, Dragons can’t seem to convert their possession gains. Thunder draw the score back out to 10 goals with a smooth shot from Cardwell. Thunder contest every ball, making it hard for Dragons to find a way to goal, but Dragons find a way to get the ball to Georgia Rowe who adds another goal on the board. Dragons show they can step up their defensive pressure by stopping Thunder from getting the ball in easily to Mvula, but Thunder find a way and add a goal before the half time whistle.

Changes come from both teams. For Thunder, we see Eleanor Cardwell move to goal shooter with Metcalf taking the goal attack bib. Lois Pearson takes to the court as wing attack with O’Hanlon re-entering the court as centre. Malcolm moves back to wing defence with Van der Merwe taking to the bench. The only change for Dragons is Clare Jones entering the court at centre. After going goal-for-goal in the opening part of the third quarter, Greene-Noel takes a big intercept, but it isn’t finished by Dragons. Greene-Noel has ramped up the intensity and gets a string of tips and intercepts. Dragons see the score reduce to 7 goals. With 6 minutes to go, Thunder bring Roscoe on to the court to replace Sanders. Lifting from their teammate, Clare and Nia Jones add to the Dragons stats, but it doesn’t get finished off down in the attacking end. A huge ball in from Malcolm in the centre third to Cardwell in the shooting circle keeps the score ticking over for Thunder. Shaquanda Greene-Noel finishes the quarter off with another intercept increasing the pressure.
Thunder show their versatility by making more changes. Shadine returns to the GD position, playing against her South African Teammate once again. Thunder’s defensive pressure forces Dragons to make an error, but Shaquanda Greene-Noel gets the ball back for Dragons once again. Shona O’Dwyer returns to the court at centre, with Clare Jones taking the wing defence position and Nia Jones going to the bench. A flying intercept by Shona O’Dwyer and an offensive contact against Mvula, gives Dragons a big lift with limited time left on the clock. After returning to the court, Nia Jones gets an intercept but Dragons can’t convert. Thunder’s Millie Sanders takes a dive into the boardings, keeping the ball on court and putting the score board pressure on Dragons. Nia gets another intercept, hoping to give Dragons the momentum they need in the final minute of the game. The score returns to an 8-goal margin, but Thunder manage to score with 20 seconds left on the clock.

Celtic Dragons’ Laura Rudland is awarded the player of the match after a great performance.
Dragons play Saracens Mavericks away next match on Saturday 9th April. They then face Leeds Rhinos and Loughborough Lightning in the Spring Showdown on the 16th and 17th of April. Make sure you get your tickets now by clicking this link.

Player of the Match
Laura Rudland