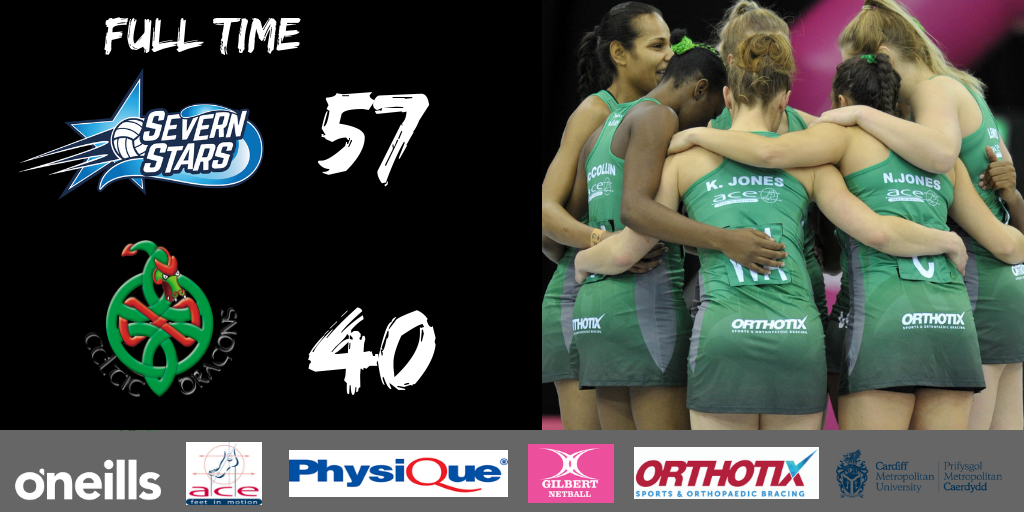 It was a flat and flaky show from the Dragons on the road as the team bounced in disappointing style from their impressive win last time out at London Pulse.

From the very first centre pass, the writing was on the wall for Dragons as the team’s connections failed to fire and Stars were able to race into a 5 goal lead midway through the quarter. Celtic Dragons demonstrated that they were perfectly capable of intercepting Stars’ ball, with Dee Bolakoro making a nuisance of herself in the Dragons half. However, Dragons failed to make best use of these opportunities and Stars kept a hold of a modest lead at the break.

The second half bore many similarities to the first, with Dragons unable to score consistently from their own centre pass and Stars being far more clinical with their chances. The home side seemed to drop their intensity as the quarter drew to a close and Dragons were able to work their way back into the match to a limited extent, with Clare Elsley showing some good creativity in mid-court to give Chelsea Lewis some scoring opportunities.

Despite what appeared to be some strong half-time words from captain Nia Jones, the third quarter brought misery to the Dragons as the outstanding Maryka Holtzhausen, who performed so well with South Africa in the recent Quad Series, rattled in score after score, complimenting Georgia Rowe’s static height. In the first half, Dragons failed to make the most of their chances and in this period the Stars didn’t give them a sniff. As a result, there was a 11-goal cushion at quarter time and the game was gone.

Head coach Tania Hoffman used the fourth quarter to bring on some fresh legs and expose some of the more junior players to Superleague intensity. As a result, Dragons seemed to yield what little control over the game they still had and it was an emphatic win for the home side in their new Gloucester arena.

The Dragons will now hit their training base at Cardiff Met hard this week with plenty to work on. Their first home game of VNSL 2019 will be on Monday 4 February against Saracens Mavericks at the Sport Wales National Centre in Cardiff. Round 2’s win against Pulse came after a similarly tough game against Team Bath so Hoffman will be confident that this squad is more than capable to getting themselves well back in contention as the 2019 campaign continues.