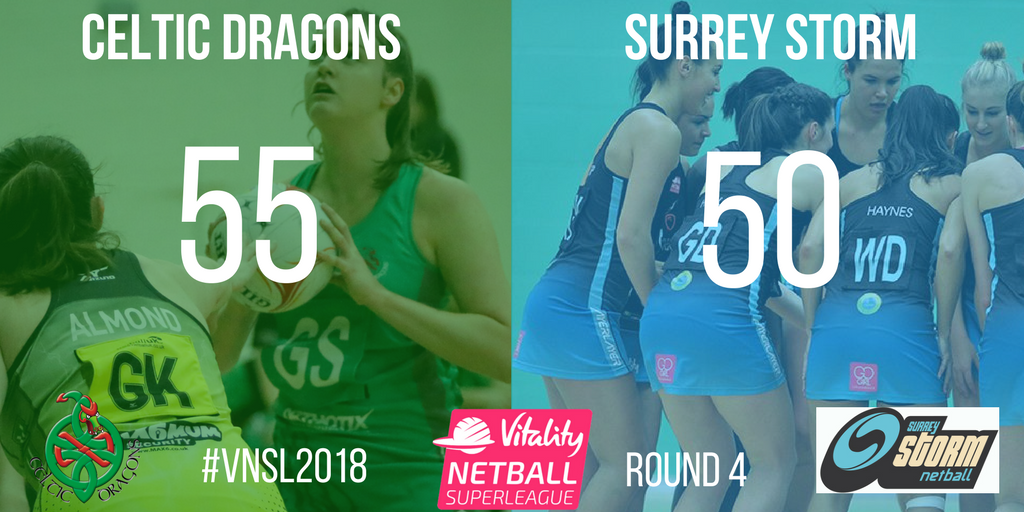 A slow start for Celtic Dragons in the first minutes of the opening quarter against Surrey Storm proved deceptive as the players in green went on to record their first victory for the VNSL 2018 campaign. The match also marked the arrival from Australia of Celtic Dragons and Wales new Interim Head Coach, Julie Hoornweg.

Surrey took an early lead, 5-2 as the home side lost the initiative early on, however, the speed of playmakers Bethan Dyke and Kyra Jones helped the Dragons find ample space and within a minute the teams were even once more. Sarah Llewelyn scored some brilliant long-range goals as all of the shooters in green upped their accuracy. Celtic Dragons were unlucky to trail by one at the break, after some late indecision cost them an easy goal.

Eleanor Roberts replaced Georgia Rowe at the start of the second quarter as the Dragons looked to take the lead. Initially, it was Storm who made some gains, taking a 3-goal lead at one point. However, an outstanding last gasp interception in front of goal saw the pendulum swing back in Dragons favour, with the scores tied at the half.

Some further substitutions saw Cara Lea Moseley and Leila Thomas come onto court for the third period, as the management sought to break the deadlock. Storm’s Charmaine Baard was steadfast at goal as Dragons search for a weakness in the visitor’s defence. The crowd were full of glee as Georgia Rowe, who had returned to court at this point, received a court-length pass completely unmarked. Dragons took a one-goal lead with a nail-biting 15 minutes to come.

To this point, either side would have been unlucky to lose, however the Dragons proved a cut above from the moment the whistle was blown for the fourth period. Cara Lea Moseley’s shooting was en pointe as Bethan Dyke, who won player of the match, took a heroic interception. Storm made one of their own but to the visitors’ dismay the opportunity to bite back was thrown straight out of court. As the minutes ticked down, Celtic Dragons seemed capable of going on for another quarter as they finished with a flourish and celebrated a well-deserved victory, to rise to a mid-table position in the league.