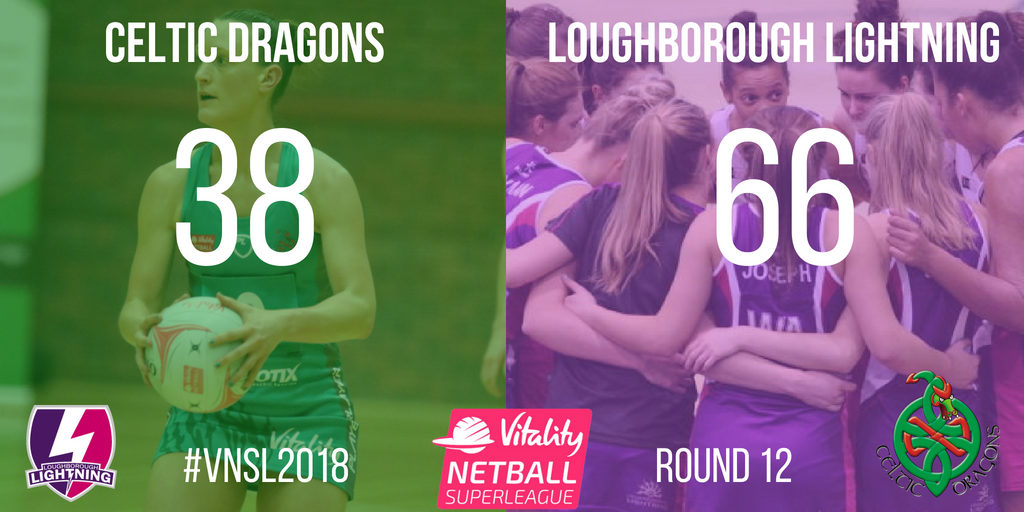 It was a great occasion as Celtic Dragons welcomed Sky Sports to the Sport Wales National Centre Arena for the first time this season. The crowd gave both sides an exceptional welcome as the Green Army looked for win number three of the season against an in-form Loughborough Lightning.

The visitors started strongly as the Dragons’ first effort, a well-intended long ranger from goal-attack Cara Lea Moseley just kissed the edge of the net and rebounded harmlessly away. Dragons were soon into stride however, and an intelligent interception from Kyra Jones gave Lightning plenty to think about with the score at 2-3 after five minutes. However, as the period went on, Lightning were able to display finesse and speed and grew their lead to 6. Indeed, Dragons found that many of their longer passes proved easy pickings for the rangy visitors. Despite this, Georgia Rowe had the last say with a late goal.

The second period began with an eminently forgettable first few minutes for Dragons fans. Loughborough continued to build their lead and amassed 25 goals before the home team could break into double figures. At times, passing options seemed few and far between, however the indefatigable Kyra Jones scrapped hard to help get the ball out. Clare Jones came on in the second quarter and provided some physicality at wing-attack. Nevertheless, Lightning’s shooter, Ugandan icon Peace Proscovia was unfazed at goal and the half-time lead looked insurmountable.

At half-time Celtic Dragons were proud to host Eastside and Newport walking netball clubs for an exhibition match. Walking netball is on the rise across Wales and the UK with more and more people – who thought they may never be involved in netball again – getting involved.

Alas, walking netball was the furthest thing from the Dragons’ minds as the third period began. Eleanor Roberts displayed some great accuracy to register the Dragons opening goal and Kyra Jones  once again made a sterling interception at the other end of the court. But try as they might, the home side found little in the way of scoring chances. As the quarter wore on, Rowe found Dragons’ 20th goal as Leila Thomas did well to throw Proscovia off her stride for a time.

Lightning held a nineteen-goal advantage going into the final period and the home fans had hopes of denting it further given the strong last couple of minutes of the third quarter. In the event, Dragons made a good show of it with a trio of unanswered goals a couple of minutes into the period. Sarah Llewelyn busied herself in the circle and put up some crackers. It was, unfortunately, a bit too little too late, as the first half procession had left its mark on the scoreboard, despite a winning final 15.