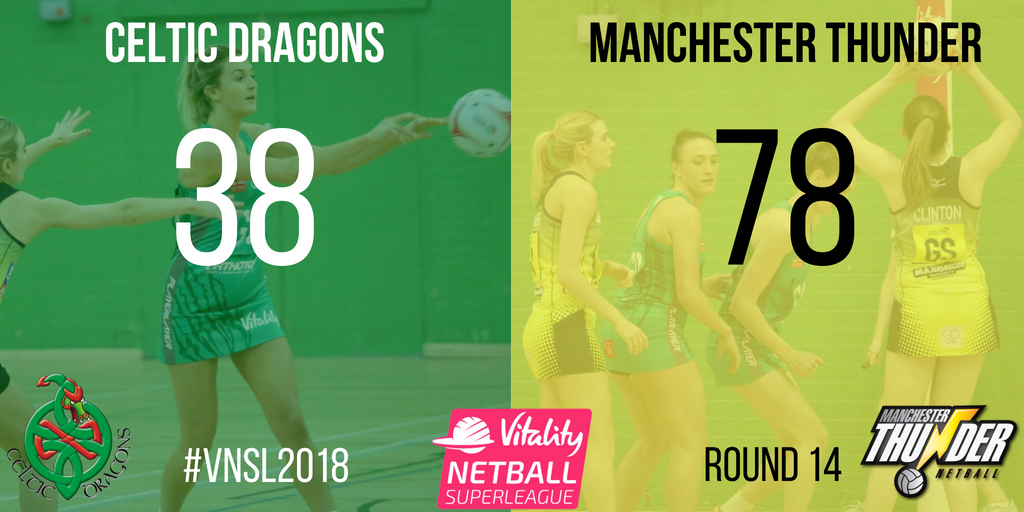 Manchester Thunder recorded an impressive winning margin as Celtic Dragons struggled for fluency on an emotional evening at the Sport Wales National Centre.

Prior to centre pass taking place in this Round 14 contest, the teams, management and crowd observed a minute’s silence in memory of the life of former Celtic Dragon and Wales U21 player, Catherine Roberts. The loss of Catherine is a huge blow to the netball community in Wales and she was universally admired by those who knew her. An inspirational person, she lived life to the full and did everything with a smile.

When playing away from home, it is always important to make a quick start and it was exactly what Thunder did, recording 5 unanswered goals and stunning the Cardiff spectators. Fortunately, Kelly Morgan was able to organise the defence and won a turnover to provide the shooters with some much needed ammunition. Shooting was more miss than hit in the opening minutes, but as Cara Lea Moseley and Georgia Rowe settled into the contest, Dragons were able to get a respectable number of shots in. Nevertheless, it was Thunder with a 9-goal advantage at the break.

Enthusiastic chants of ‘Let’s Go Dragons!’ did little to deter Manchester in what must have felt like the longest second quarter of the season for the Dragons. Kyra Jones was substituted and the resulting positional re-organisation of the squad led to a wholesale routing in the second period. Passes went astray and Thunder’s Joyce Mvula enjoyed a feast of shooting opportunities.

With the game seemingly gone after the half-time interval, it was time for Celtic Dragons to restore pride to their performance and the third quarter saw a marked improvement. There were some great long-range shots from Dragons Player of the Match Cara Lea Moseley and passing was far more clinical from the whole team. Sarah Llewelyn was particularly effective in coming off the bench. She did well to collect several stray Manchester passes and moved efficiently around the court. A tighter quarter score demonstrated the pride and professionalism of the home side.

The final quarter saw Manchester’s substitutes continue to build on an impressive display. Kelly Morgan and Leila Thomas kept to their work in defence whilst Eleanor Roberts’ shooting was focused and consistent. Nevertheless, the game had been won a while ago and it was Thunder who continued their excellent VNSL 2018 campaign with another victory.