It all starts now! We’re excited to begin squad announcements with our shooters! We are delighted to announce that our 2023 Celtic Dragons shooters are Georgia Rowe, Chelsea Beard, Zoe Matthewman, Gabby Sinclair, and Phillipa Yarranton!

Georgia’s back again for another season in front of the Green Army and we love seeing her in Cardiff! Georgia made her VNSL debut with Celtic Dragons. She has continued to develop her game and was impressive for Dragons last season. Georgia featured in the top 10 goal scorers last season in the VNSL, and her shooting accuracy was 91.88% which shows her precision against the toughest of opponents.

When talking about the new season, Georgia said “I am super excited to be returning to Dragons this year. I felt we made such huge improvements as a squad last year, so I’m excited to continue that and really challenge and push every team. I can’t wait to get some training done with the girls and do some damage!”

We are delighted to welcome Chelsea Beard (nee Lewis) back to Dragons for the 2023 season! Chelsea made her debut for Dragons back in 2010 and has a wealth of experience. Since making her debut, Chelsea has played for Netball Waitakere in New Zealand before returning to the VNSL to play for Team Bath and coming back to Dragons. She also has played for Wales internationally and after the birth of her two boys, we are delighted to have her in the squad for this season!

About her return, Chelsea said “I am really excited to have the opportunity to be back with the Dragons and playing top level netball again for season 22/23. I’ve had a couple of seasons out, and I can’t wait to get back into the netball environment and push myself and see what I can achieve with the squad.”

Zoe Matthewman may be a new name to you, but she’s ready to make her VNSL debut and we’re excited to show you what she can do on court! Zoe is a Wales Senior international athlete and has previously been part of the Loughborough Lightning Pathway. Zoe also co-captained Nottingham Trent University Netball who had an undefeated season and became Varsity Champions!

When she signed for Dragons, Zoe said “I’m beyond excited to have signed my first Superleague contract with Celtic Dragons. I am super grateful, and I can’t wait to get training alongside the team and see what we can do!”

Making her way to Cardiff all the way from Australia is Gabby Sinclair! We’re thrilled to have Gabby in our shooting line-up for this season! Gabby has been a regular feature of the Collingwood Magpies squad for the past four seasons. Gabby netted an impressive 58 goals and 25 Super Shots in the Suncorp Super Netball League, highlighting her rangy shooting.

When talking to Gabby about making her VNSL debut, Gabby said, “I’ve heard great things about the league and the Welsh fans in particular! I am excited to meet the girls, help build the high-performance programme, work with Dannii and the coaching team and get back to playing netball again! I know Lefébre Rademan is a huge part of the Celtic Dragons family, and I am wishing her all the best with her rehab and recovery! Finally, a big thank you to Meg at Enigma for her support and guidance with this move. It’s great to have someone so supportive by my side. See you all in 2023!”

Joint Dragon of the Year, Phillipa Yarranton is returning for her second season and is excited to get back with the squad. Phillipa is part of the Wales Senior International Squad and made her senior debut in the Commonwealth Games this year.

Speaking about this season, Phillipa said, “I am delighted to be returning to Celtic Dragons for a second season. I can’t wait to get back into training with some old and new faces and continue to learn, work hard, and embrace my journey with a smile on my face!”

Up next is our 2023 midcourters! We are delighted to reveal our engines of the team. It’s the fab 5 – Shona O’Dwyer, Laura Rudland, Hannah Leighton, Clare Jones, and Celyn Emanuel! If you’re looking for consistency, then this midcourt is the one!

Our pocket rocket is back again! Shona O’Dwyer is returning for her fourth season! Shona made her debut for Celtic Dragons in 2020 and we are thrilled to have her in green for yet another season! As well as being a Dragon, Shona plays internationally for Wales and competed at the Commonwealth Games this summer. Last season, Shona accumulated 236 feeds, five intercepts, six deflections and seven turnovers!

When asked about returning to Dragons this season, Shona said “I am super excited to be back at Dragons this season. The progress we made last year was amazing and I’m looking forward to continuing to build and move forwards as a squad.”

Our next returning midcourter is our pin-point feeder! Laura will be putting on the green dress for her third season, and she is ready to play in front of the Green Army once again. Laura was a part of the captaincy team last season and we’re delighted to have her representing Celtic Dragons once again!

Talking about the 2023 season, Laura said “I am really excited to be back at Dragons this year. Our progress over the last season was huge, and I am looking forward to building on that and showing everyone what we are capable of from the start.”

She came to Dragons last season and she’s back again! Hannah Leighton will put on the green dress for her second season in Cardiff! When she made her debut for Celtic Dragons last year, Hannah made a huge impact, and she’s happy to be back for another season. From her eight appearances last season, Hannah gained three intercepts, seven deflections, five turnovers and 74 feeds!

About her return to Dragons, Hannah said, “I am very pleased to be returning for my second season at Dragons. I’ve loved the team environment and am very excited to see what we can achieve, building on from last year. I can’t wait to be back working with some familiar faces and new ones ahead of the 2023 season!”

Returning for her seventh season is Clare Jones! The ever-tenacious Clare is determined to continue to build on the momentum from last season and we’re excited that she will be back in green once again!

About signing for Dragons, Clare said, “I couldn’t turn down the opportunity to re-sign for Dragons, particularly after the promising season we had last year. We showcased an exciting style of netball that demonstrated our capability and I very much wanted to be a part of continuing to build on that this year. I am hoping to continue to drive standards both on and off the court for Dragons and I am ready to approach this season as ever with passion, determination, and tenacity.”

Our final midcourter for the 2023 season is Celyn Emanuel! Celyn made her debut in the VNSL in 2022 and is ready to progress and build from last season. Celyn is part of the Wales Senior Squad and made her international debut this year.

About last season, Celyn said, “Last year was a great learning experience for us. I’m so excited to build on that and show everyone what we can do!”

Our first defender is back for her second season in green. Annabel Roddy returns! We’re excited to see joint Dragon of the Season play in Cardiff again for season 2023. Last season, Annabel recorded 59 deflections and 64 turnovers and won two VNSL Player of the Match awards.

Talking about this season, Annabel remarked “I am really looking forward to playing for Celtic Dragons this year and being back out in front of the Green Army. We are determined to push on from last season and I can’t wait to see what this year brings for the team.”

Our next defender made her debut for Dragons back in 2019 and she’s here for another! Leila Thomas will be putting on the green dress for her fourth season! Leila is a Welsh International netballer who has recently competed in the Commonwealth Games.

Leila said, “I’m so excited to be back for my fourth season with Dragons. Last season, our team culture was stronger than ever. I can’t wait to be back with the team, see some familiar and new faces and further build on connections to improve on last season’s results.”

She’s a new face to Celtic Dragons. Ally Housley will be playing in front of the Green Army for season 2023! Ally is a tenacious athlete who has represented England, and has been part of the pathway since she was 14. Ally gained her first senior cap for England at the Europe Netball Open Championships in 2019. Previously Ally has been a training partner for Wasps Netball, and has been a part of the U21 squad, where she was coached by Dannii. We can’t wait to show you what Ally can do on court!

When speaking about the new season, Ally said, “Everyone is always excited for a new season, however, having the opportunity to be coached by Dannii again and to be a part of a new team brings more excitement than any year before. There will be lots more challenges to come, but my last season in Australia has prepared me for how best to take them on.”

This person’s return was never in doubt! She’s been playing games before the league has started. Queen of the hustle, Shaquanda Greene-Noel is back for season 2! Our Green Army Player of the Season will return to Cardiff, and we’re ready to see her top the VNSL stats tables once again. Last season, Quanda featured in the top 3 for most intercepts and topped the statistics for most turnovers (119).

After signing for another season, Shaquanda said, “A highly anticipated reunion and an absolute pleasure to recapture the indomitable spirit of the Dragon.”

Millie Carter has been part of our Dragons Pathway and is now elevated to our squad of 15. Millie is looking forward to start training again with her fellow defenders.

When speaking to Millie, she said, “I am very excited to start training with the girls and can’t wait to see what my future will hold. I am so grateful for the opportunity to be a training partner for the team.”

We are delighted to have revealed our 2023 Celtic Dragons Squad, and can’t wait to continue to build from last year. 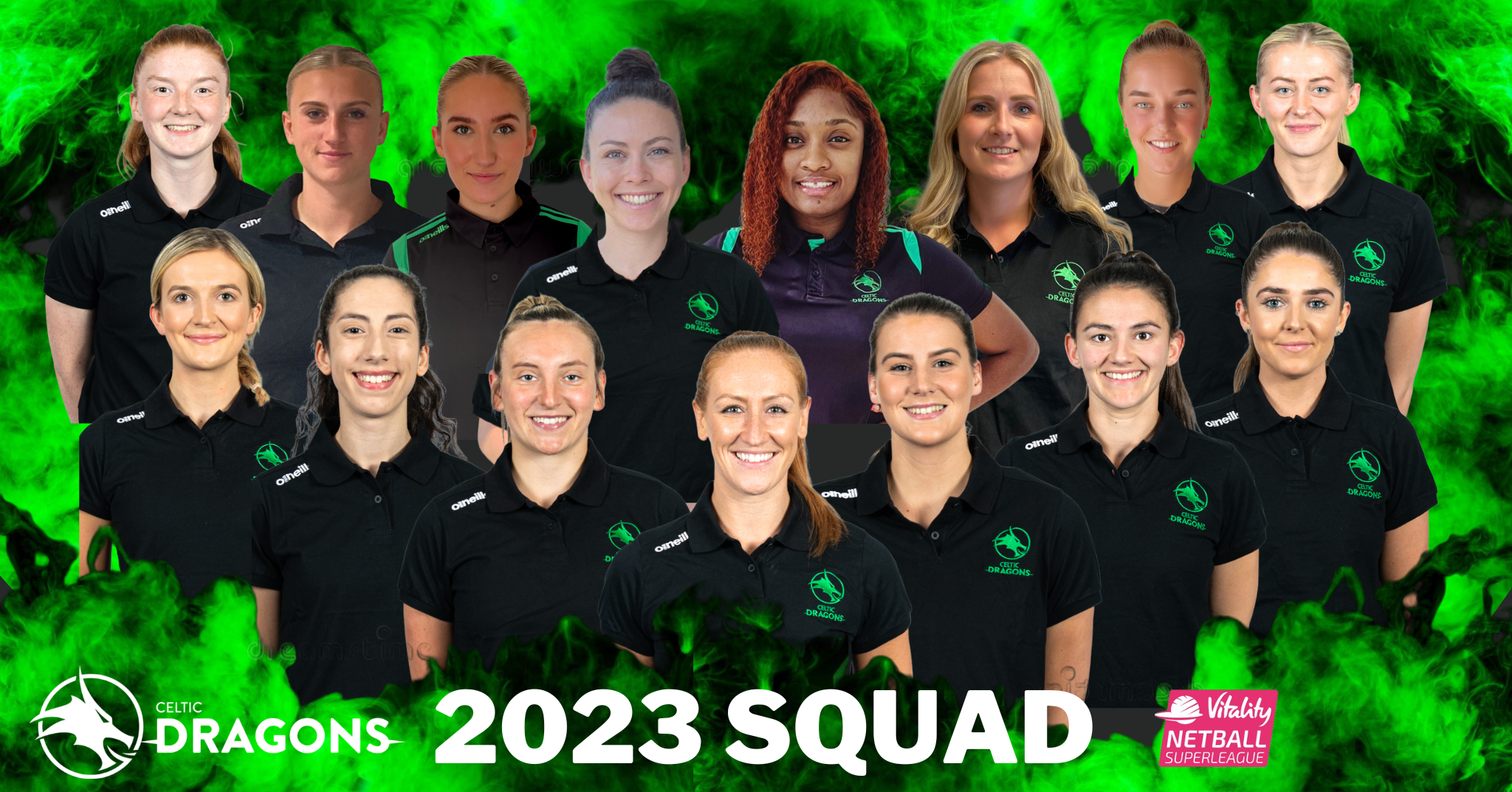